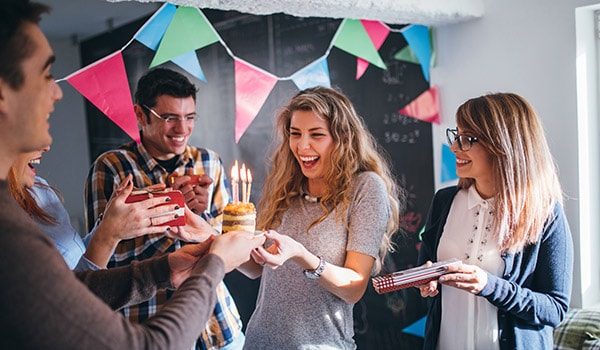 Create your own anniversary photo album

Anniversaries are a commemoration of great times spent together, tough times endured side by side and new beginnings yet to come. An anniversary photo album should be filled with special pictures together with hand-in-hand moments and heartfelt kisses. bonusprint offers a great selection of anniversary photo books to help make that special occasion even more memorable. An anniversary memory album from bonusprint features excellent and tasteful layout options so that you can arrange your collection to maximum effect. With our customizable options, you can give your anniversary photo album the design you wish.

Photo book of your party

You can’t mark an anniversary properly without the proper party. A photo book party gift from bonusprint ensures that you will be able to store all those moments for revisiting many years down the line, whether they be treasured moments you want to preserve forever or slightly embarrassing ones you’d sort of like to forget! Match the good with the bad with a party memory book and start a collection that will grow as the years pass. Our selection of party photo albums comes in festive and fun colours and designs and allow you to choose the right framing for your photos. Gift someone a party photo book and get the celebrations started!

The modern age of digital photography has meant many changes and new options in the world of print photography. We now have the capacity to take so many images that it can be hard to organise them all and even harder to print them all out individually. bonusprint makes sure to stay ahead of the curve so we can bring you all the latest design options. A printed anniversary photo album saves you time and allows you to organise your collection using your computer or smartphone. With a printed party photo book, you create the design and layout, then upload the photos you want in the order you wish them to appear in. It’s that simple. Then we send you your printed anniversary photo book so that you can start enjoying it as soon as it arrives.

Buy your anniversary album from bonusprint and experience the quality of one of the UK’s leading photo album providers. Our items make a great memory book anniversary gift option and are also the ideal way to tailor your self-given photo book anniversary gift to your own specific tastes and needs. Order anniversary books today and start creating a collection that does your time together justice.