You’re never too old to play games – at least that’s how we feel in the albelli office! That’s why we’ve decided to share three of our favourite fun (and somewhat silly) outdoor games.

These games are a great way get out in the sun and have some fun this summer! So round up your family, your friends or some strangers on the street and try out one of the games below. Just be sure to snap a few photos to remember all the fun!

What can you do with a bunch of people and two hula hoops? Play Hula Hoop Hop! The rules are easy but it’s surprisingly challenging and loads of fun.

An equal number of people form two lines and hold hands. The person at the front of each line has a hula hoop. Each team needs to get their hula hoop to the end of the line… without letting go of each other’s hands!

To play, you’ll need to duck, wiggle and hop to pass the hula hoop along. The team that gets their hoop through first wins! 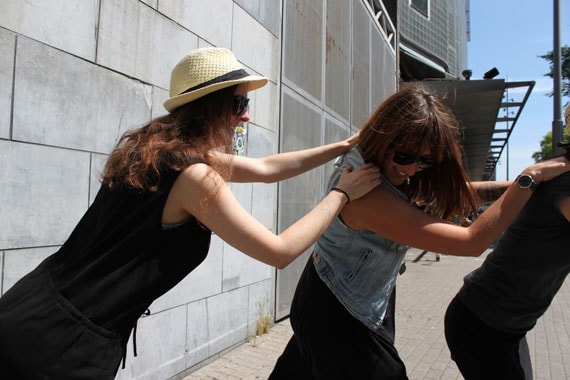 Have you ever seen a dog trying to catch his own tail? Well that’s pretty much dragon tag!

Have your group line up single file with each person’s hands on the shoulders of the person in front of him. The first player is the dragon head and the last is the tail.

The object of the game is simple – the head tries to catch the tail while dragging everyone along behind him. When he does, he becomes the new tail, moving someone new into the head position.

You keep going until you’re either a) exhausted or b) everyone has had a chance to be the head of the dragon. It might sound simple, but we guarantee it will make you laugh!

Get ready to get wet! Depending on your age, you’re bound to get splashed at least once while playing this game. Here’s how to play – going from youngest to oldest, everyone takes a turn throwing a balloon as far as they can toward the same distant object.

But how do you get wet? Well… Once you’ve had your turn, you have stand where your balloon landed. So you’re in the direct line of fire of the next person’s and each subsequent person’s throw.

Whoever gets closest to the target – or perhaps ends up the driest – wins!