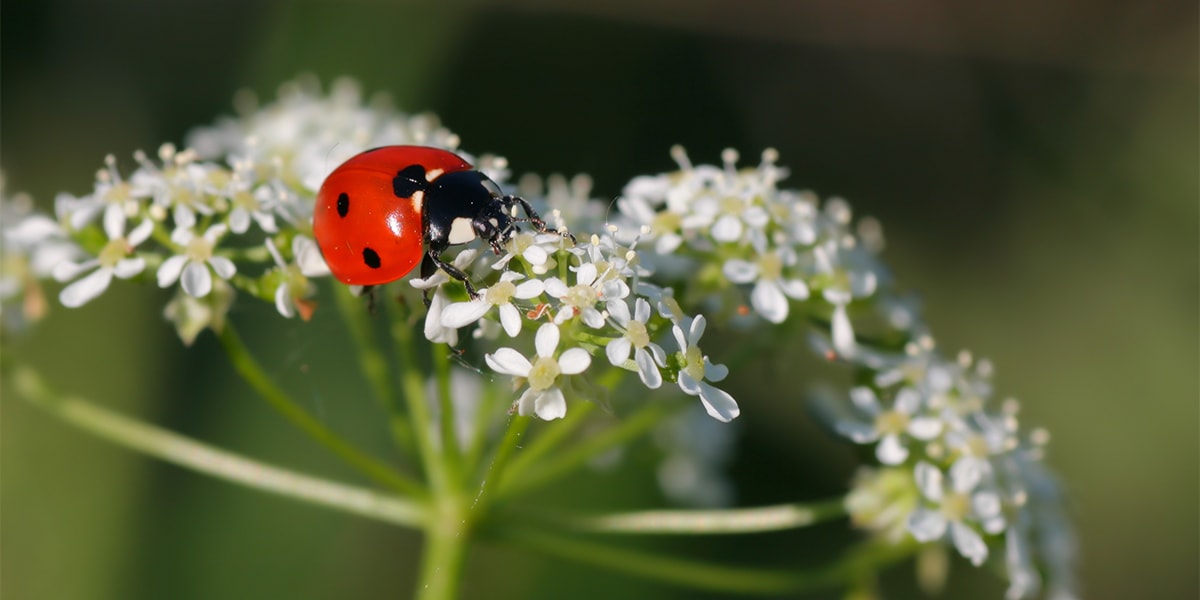 Wildlife photography is the simple but very difficult act of photographing animals in their natural habitat. It’s hard to imagine today, but it was almost impossible to capture sharp images of animals in the mid to late 1800s. The cameras, lenses and film stocks of the time were just too slow and cumbersome. For this reason, most early wildlife photos weren’t wild at all. Frank Hayes’s famous 1864 photo of the now-extinct quagga, a rare breed of zebra, was actually taken in a zoo.

Quagga with keeper in London Zoo by Frank Hayes, 1864, via Wikipedia

Many other photographers of the time actually preferred to photograph stuffed animals, due to the fact that they didn’t move. It was only when camera shutter speeds became much faster towards the end of the 19th century that photographers began capturing images of animals in their natural habitat. A good example of this is German photographer Ottomar Anschutz’s 1884 series, which captured the first wild birds in flight. 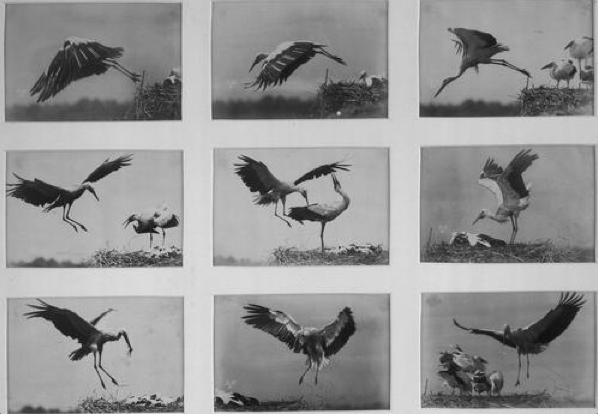 Birds in flight by Ottomar Anschutz, 1884, via Wikipedia

National Geographic Magazine published its first wildlife photos in 1906 and the genre quickly became popular among photographers and those interested in the natural world. Today, many people travel the world in their quest to photograph the most elusive animals. Others are happy capturing photos of birds, badgers and bugs in their own back garden. And of course, who doesn’t love a beautiful portrait of their pet? Today there are millions of animal lovers dedicated to taking photos of their four-legged family members. Seth Casteel takes things a step further and proves that dogs have all sorts of natural habitats, including underwater ones! 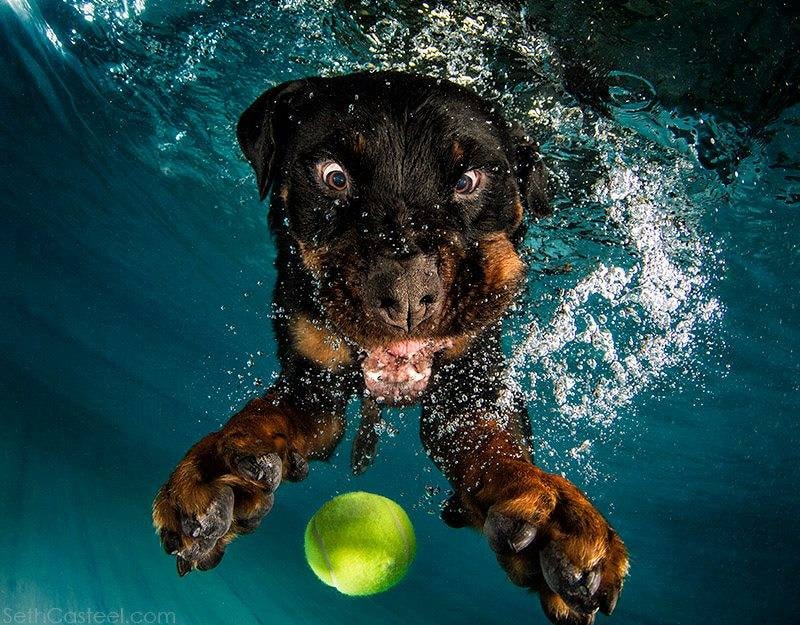 There’s no question that photographing animals is one of the most challenging forms of photography out there. After all, they’re unpredictable and it’s impossible to direct them. But with the right skills and knowledge, you can be sure to propel your wildlife photography into full flight.

1. Use the right lens 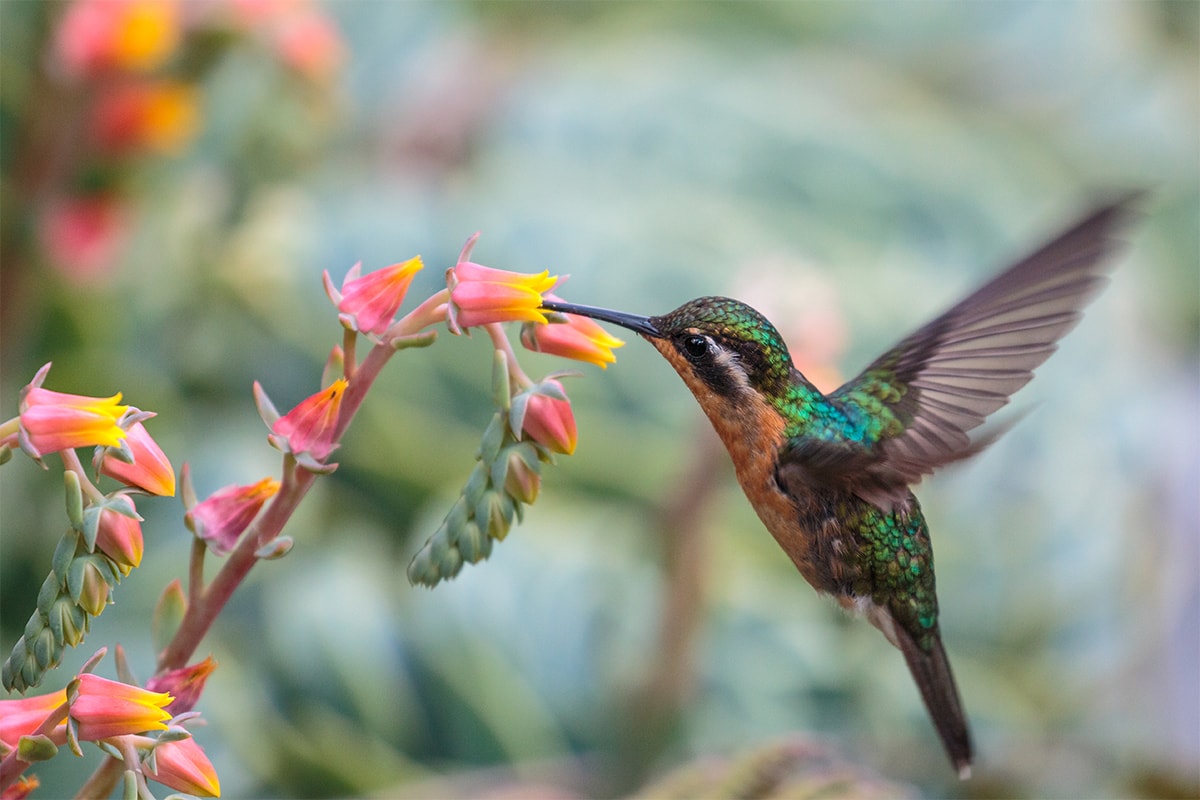 From hummingbirds that zip through the air like lighting to crazy frisbee-chasing dogs, animals are hard to keep up with. For this reason, wildlife photographers tend to use telephoto lenses that let them zoom right in on their subjects from afar. Some use versatile focal lengths like the 75mm to 300mm, while others opt for ultra telescopic lenses like the 800mm. Whichever lens you go for, make sure you choose one with OIS (optical image stabilisation) built in, as this will reduce the inevitable camera shake you’ll experience when zoomed all the way in.

Bonus tip: Some telefocal lenses also have macro capabilities, making them perfect for getting up close and personal with creepy crawlies in your garden or out on safari. 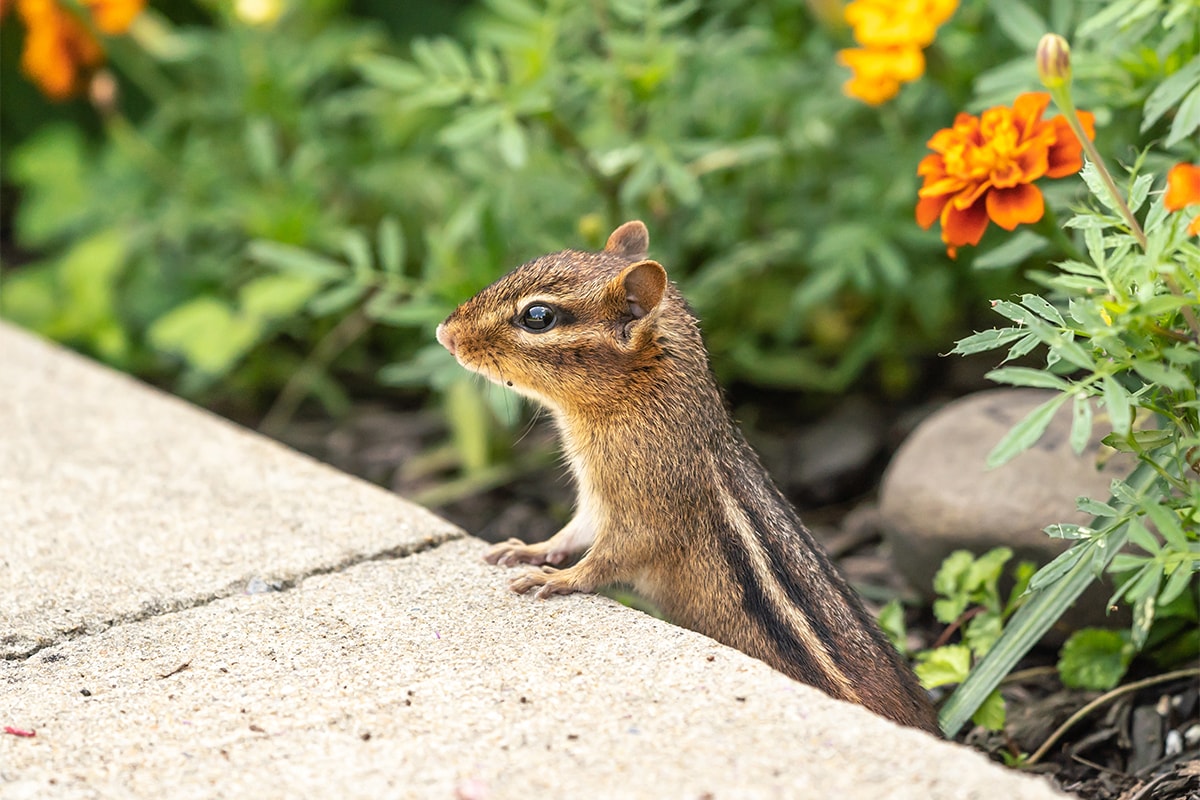 Whether you intend to photograph squirrels in your garden or sea gulls in flight at the beach, you will definitely need a fast shutter speed. This will allow your camera to “freeze” motion and capture sharp images. Most cameras have a shooting mode called “shutter priority” or “shutter speed priority”, which will be displayed as “TV” or simply “S” on your mode dial. This mode is perfect for photographing fast-moving animals as it allows you to manually control and maintain your shutter speed while letting your camera automatically adjust aperture and ISO. Start with a shutter speed of 1/500 and dial it up to 1/1000 or 1/2000 for seriously fast moving animals, such as birds or running dogs on the beach.

3. Use a large aperture setting 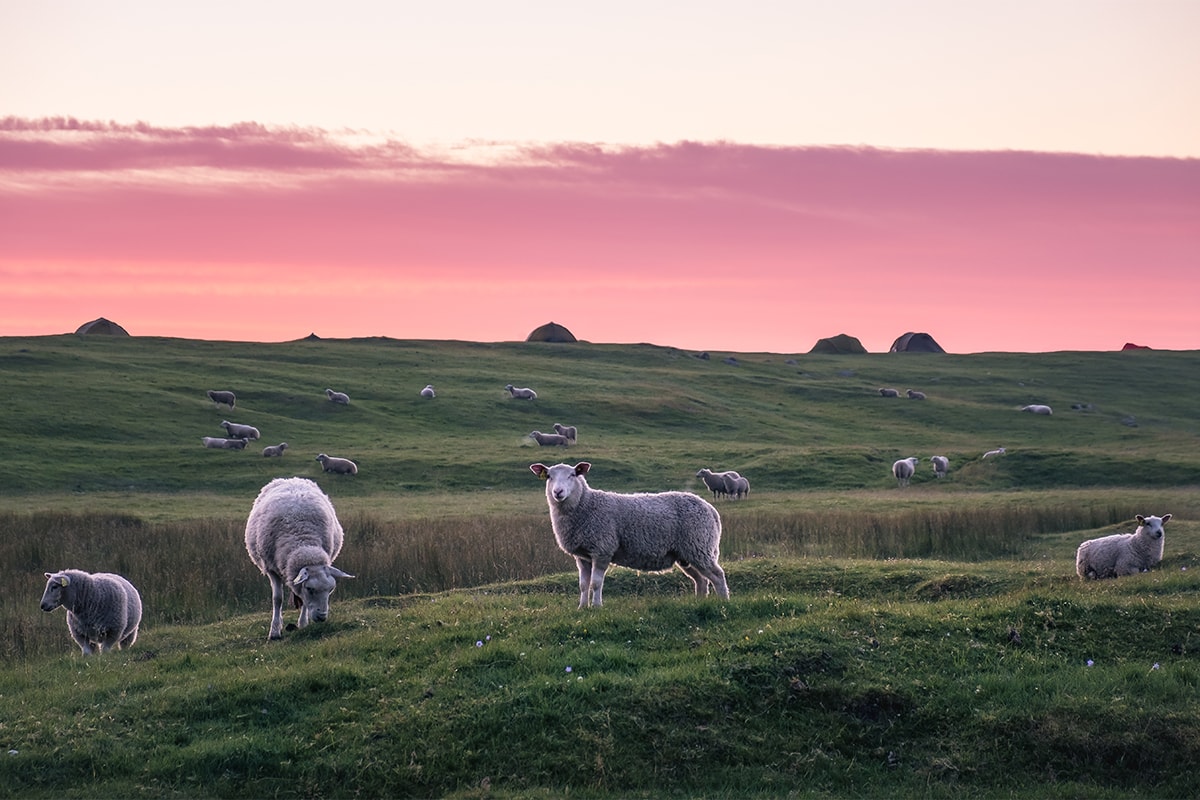 Most wildlife photographers open up their lens’s aperture as wide as it will go. E.g. f/2.8 or f/4. This lets the most amount of light possible into the camera, which means you can use faster shutter speeds. This, as mentioned above, is essential for photographing animals. As a bonus, a wide aperture will also help you blur out the background and isolate your subject.

Bonus tip: If you’re photographing groups of animals, for example a hurd of horses or cows in a field, you may need to use a smaller aperture such as f/5.6 or f/8 to achieve a deeper depth of field and make sure you get all of the animals in focus. 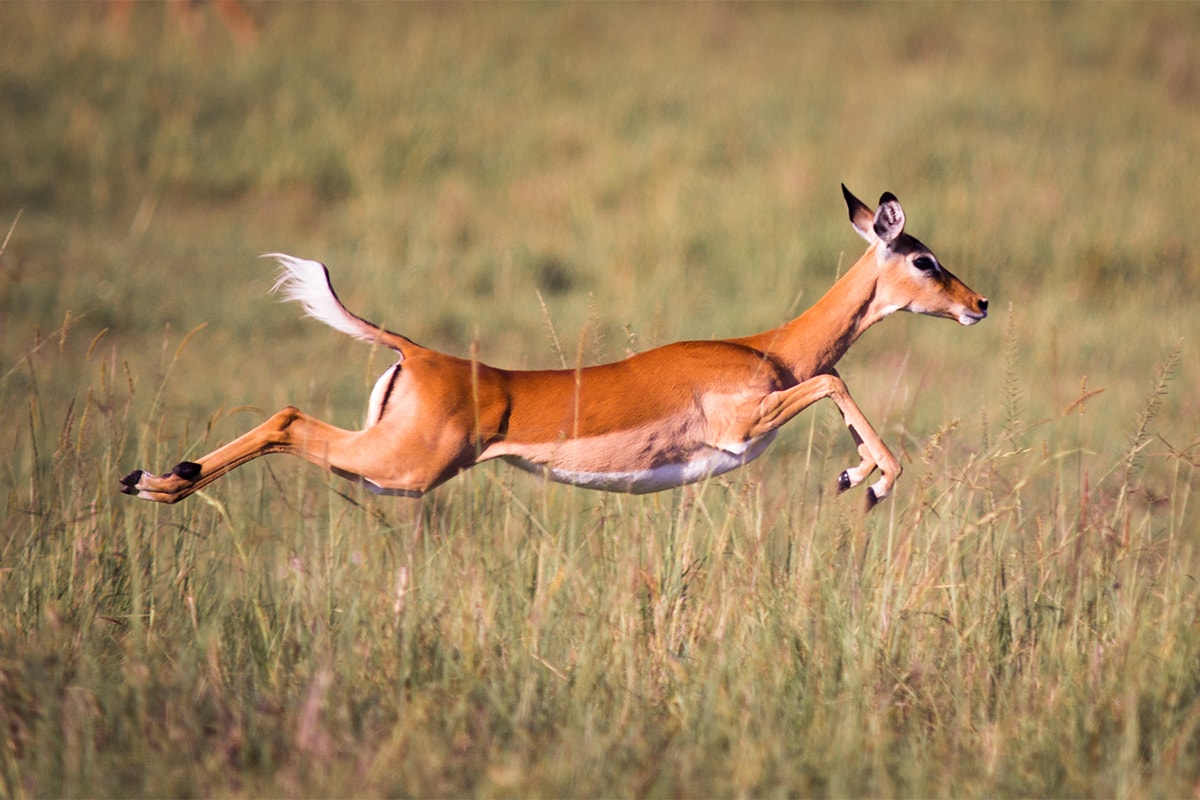 Most cameras are set up for single autofocus – ”Single AF”, “AF-S” or “AI-Servo” – by default, which means your camera focuses only once on your subject when you half press the shutter button. However, if you switch your focus mode to continuous AF – “Continuous AF”, “AF-C” or “AI-Servo” – your camera will continue to track and focus on your subject as it moves through your frame. This is perfect for maintaining focus on birds in flight or four-legged animals running at full speed.

5. Use your electronic shutter 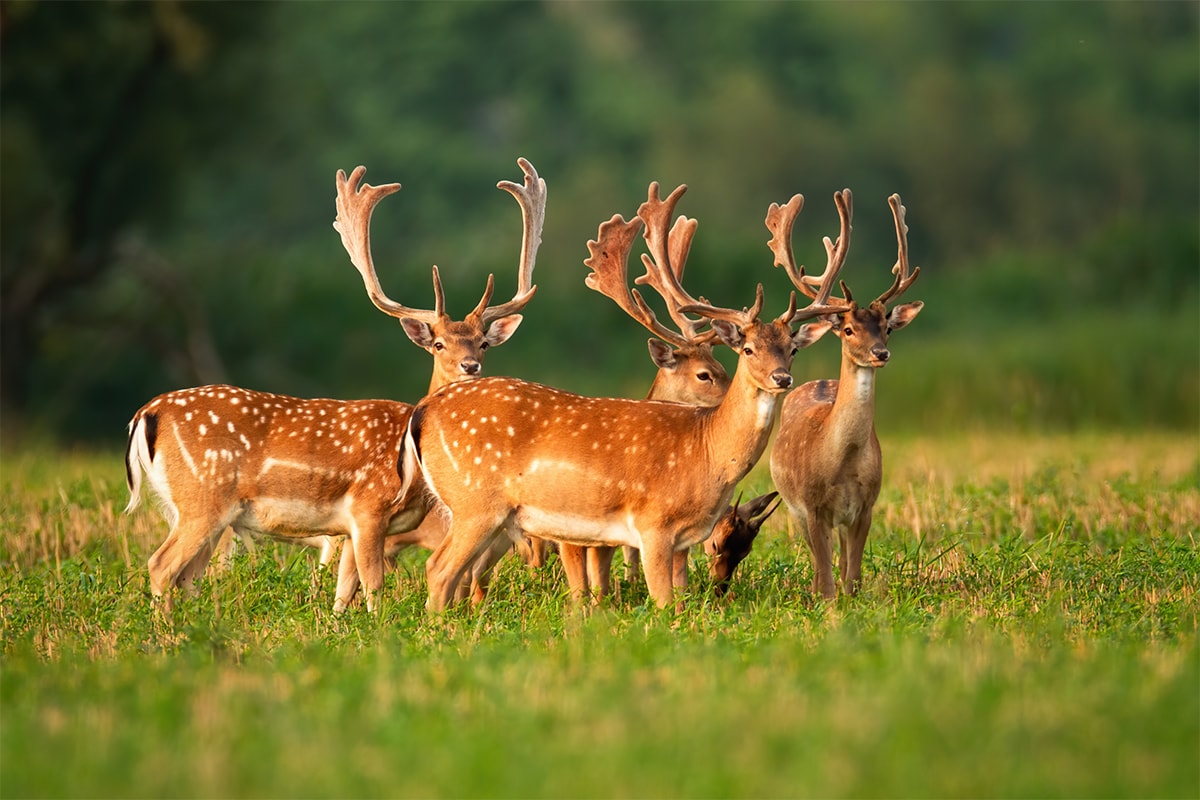 Shooting with a modern mirrorless camera? If you go into your camera settings you will likely find an option to select either “mechanical shutter” or “electronic shutter”. Electronic shutters are more or less silent, which makes them perfect for photographing animals as you won’t scare them off every time you take a photo. 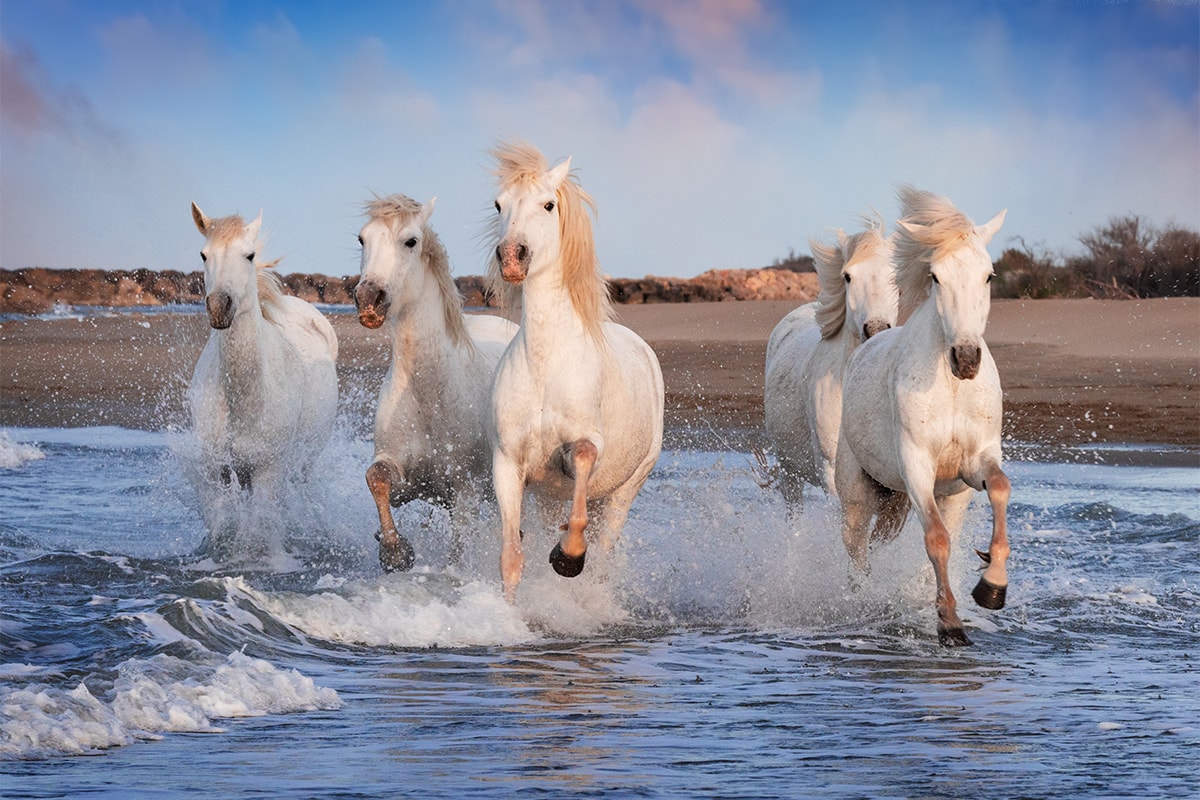 Whether it’s your cat jumping from sofa to sofa or a horse galloping at full pelt on the beach, you’ll need a really fast shutter speed to capture fast moving animals. Set your camera to shutter priority mode and select a speed of at least 1/1000. Open your aperture as wide as possible and adjust your ISO until you are happy with your exposure – this will likely be between 500 and 800. Use continuous focusing to help track your subjects. 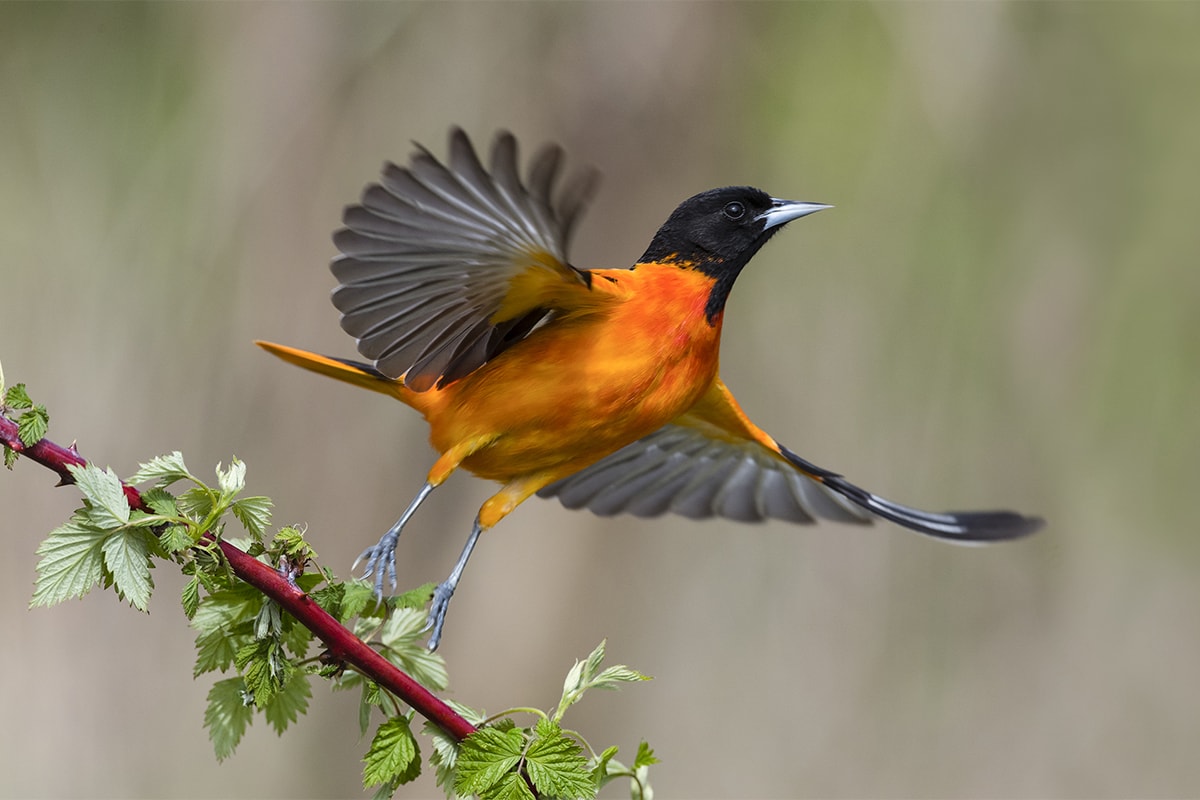 Birds in flight are among the hardest animals to photograph and require ultra speedy shutter speeds. Set your camera to shutter priority mode and select a speed of 1/2000. Open your aperture as wide as possible and adjust your ISO until you are happy with your exposure – this will likely be between 800 and 1600. Use continuous focusing to help track even the zippiest of subjects. 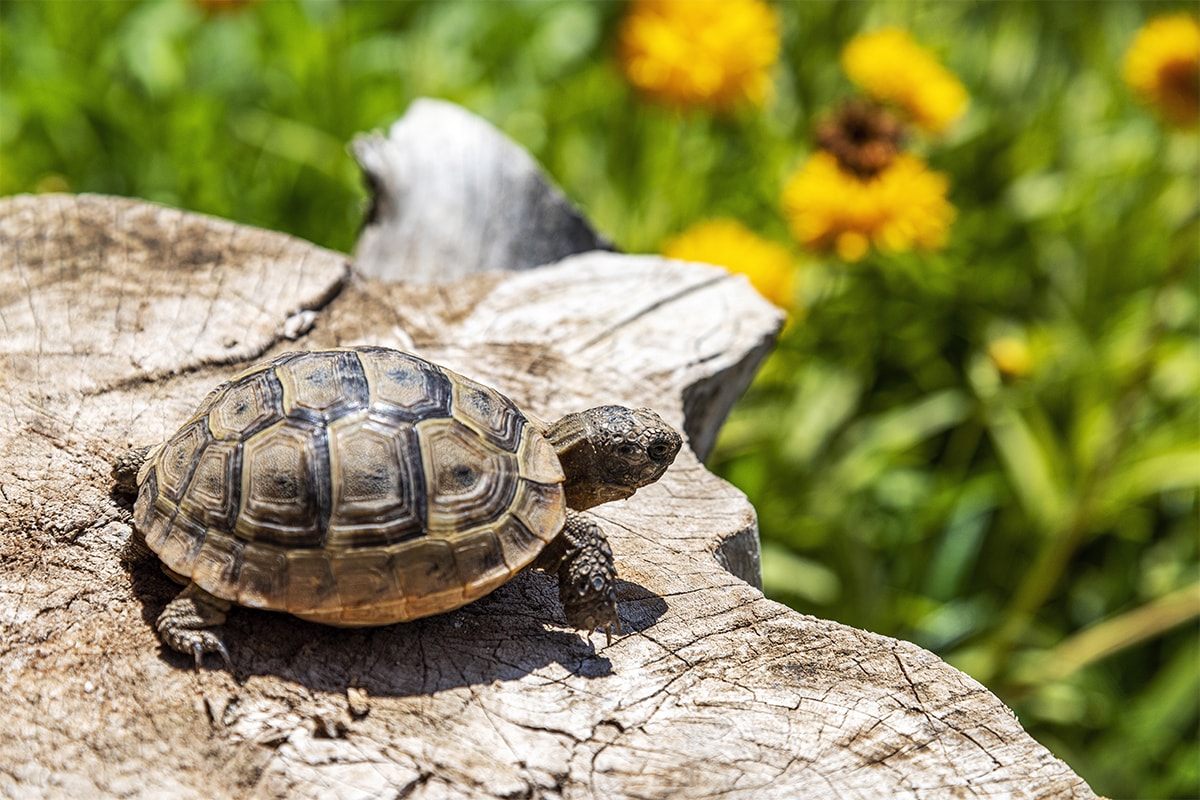 Seen a badger in your garden? A lazy flamingo at the park? Or a sleepy puppy on your couch? Wildlife photography isn’t always about being lightning fast. Sometimes it’s more about being stealthy. In these scenarios, try switching to your camera’s silent electronic shutter and dialing in a shutter speed of around 1/250 or 1/500. Close your aperture down to around f/4 or f/5.6 to get more of your subject in focus and use a low ISO like 400 for nice crisp and clean images. Then all you need to do is zoom in as close as you can whilst being as still and silent as possible so as not to scare off your subject.

Insects and other tiny creatures 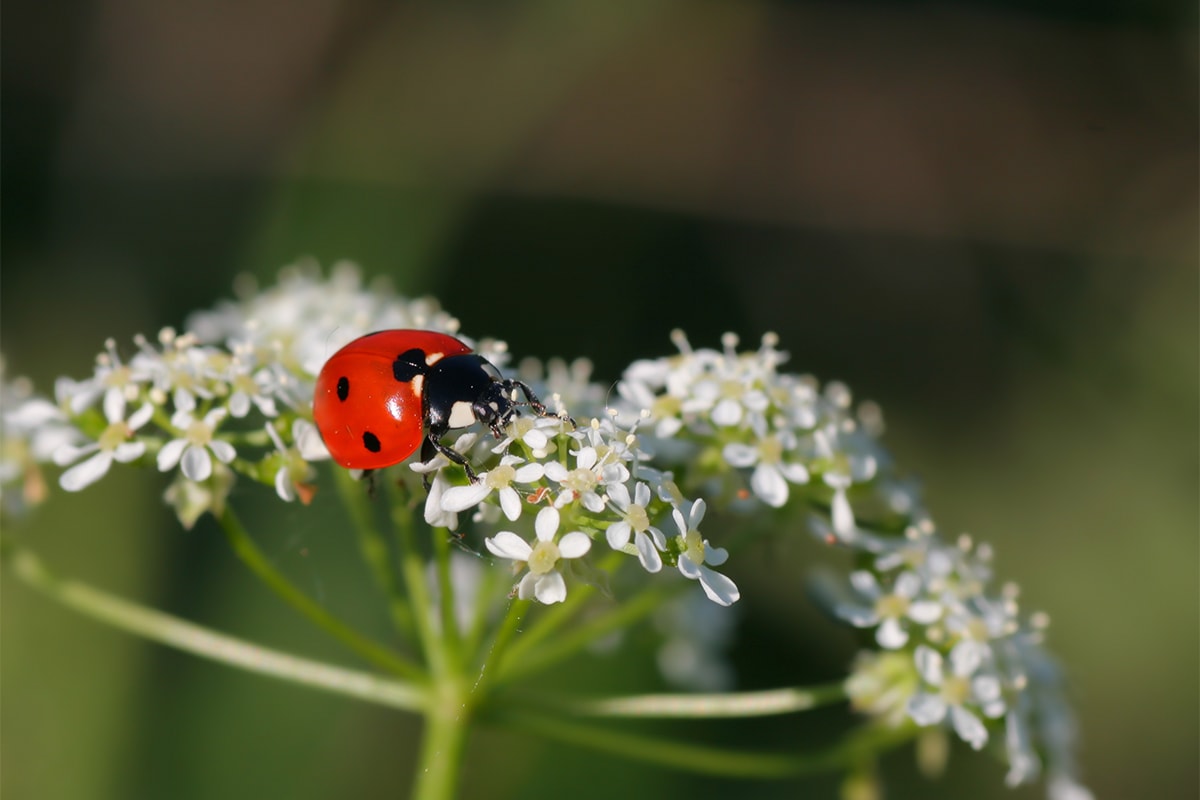 Head out into your garden or local park with a macro lens and you’ll be amazed by how much life there is right beneath your nose. From frogs and worms to spiders and snails, tiny creatures look even more spectacular up close. Use a higher aperture setting such as f4 or f/5.6 to help get sharp focus. And even though your subject won’t be moving very fast, you’ll still need a relatively fast shutter speed as macro lenses emphasise the tiny shakes that we all have in our hands. Stick to 1/500 or faster and adjust your ISO to suit (you shouldn’t need to go any higher than 800). Stick with single autofocus – “Single AF”, “AF-S” or “AI-Servo” – rather than continuous, as this will help you be more precise at close range.

Get out early (and stay out late) 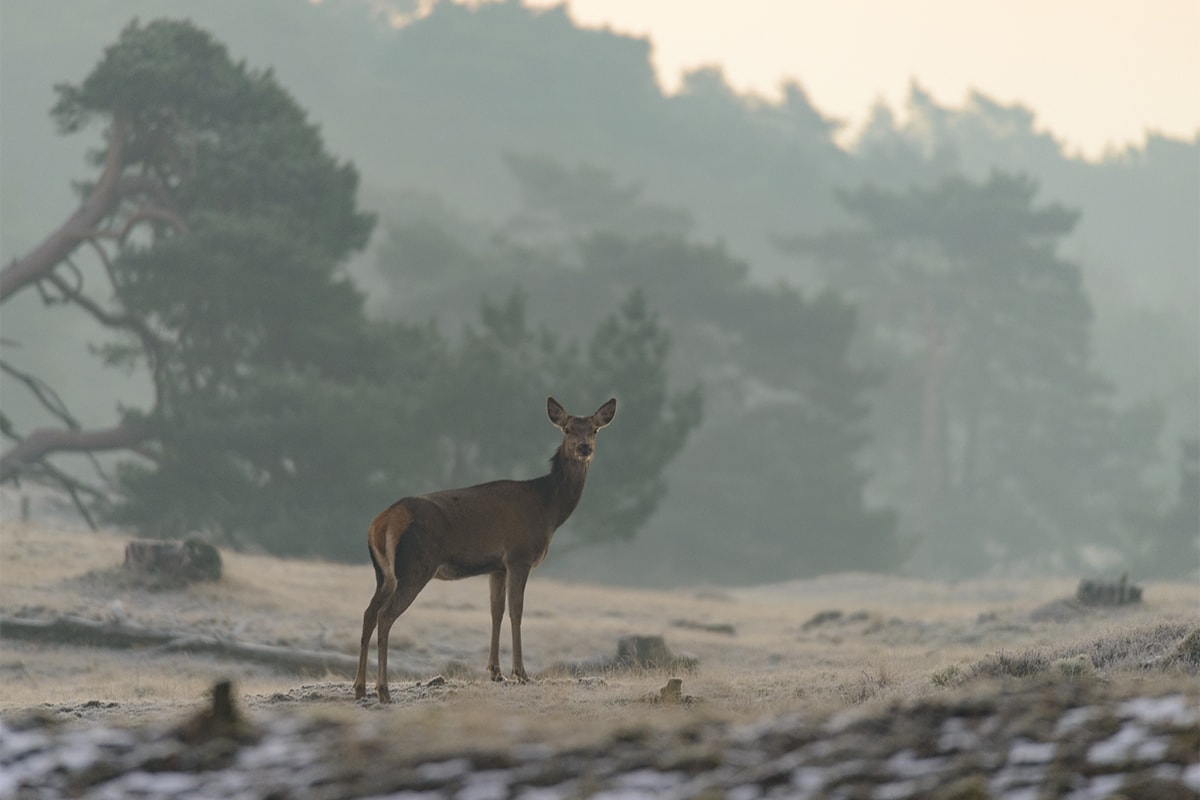 The early bird catches the worm, as they say, and hopefully you’ll capture the bird! Grab your camera and head out before sunrise to capture local wildlife springing into action. As well as being a busy feeding time for many animals, it’s also when the golden hours of sunrise are at their best. Even if the sun isn’t shining, you’ll still be able to create dramatic images of animals enveloped in early morning fog. If you’re more of a night owl than an early bird, head out just before sunset and shoot during the evening golden hours. Birdlife can also be at its best during these hours, as they hunt down their final meals of the day, and if you stay out late enough you may even be lucky enough to see a real night owl in action! 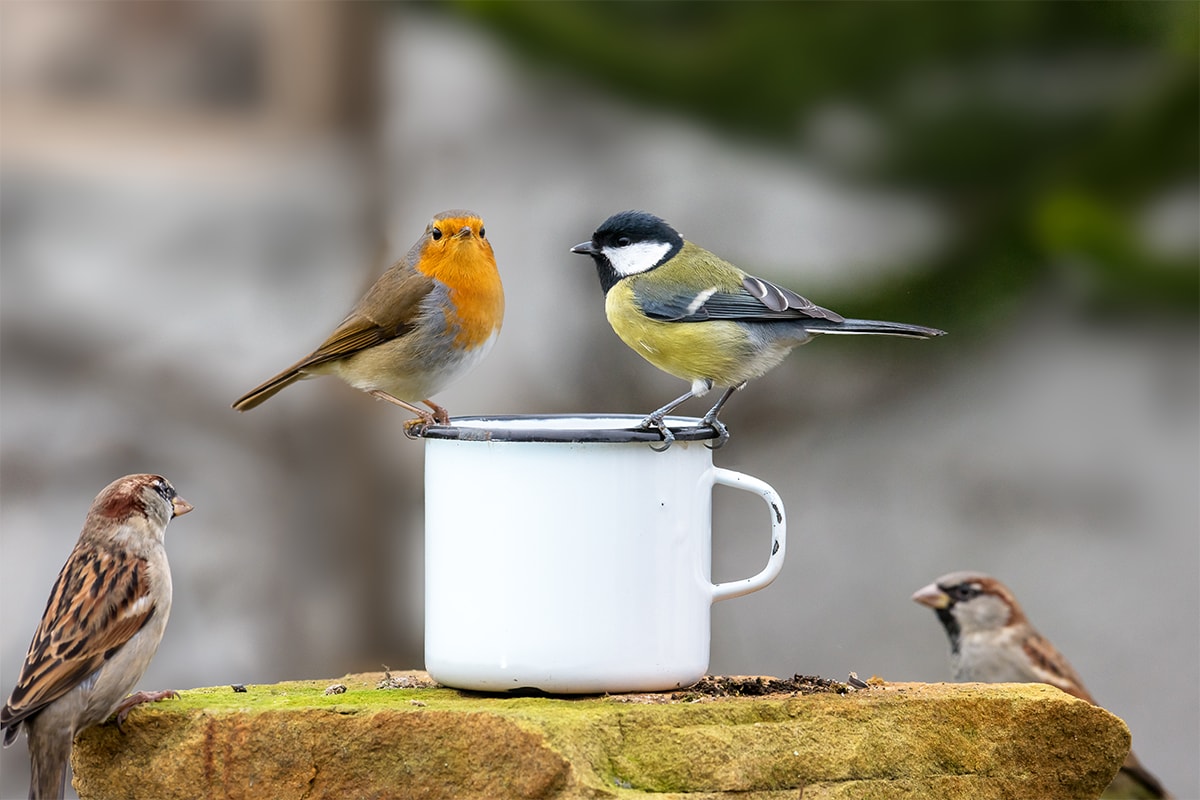 There’s no need to go on an African safari to hone your wildlife photography skills. Twist on your telephoto lens and point it out of your window. If you’re patient enough you’ll be amazed by how many animals pass through your garden or street. Set up a bird feeder to attract birds or leave snacks out for badgers, squirrels and foxes. And the best part is that you can photograph from the warmth of your own home! 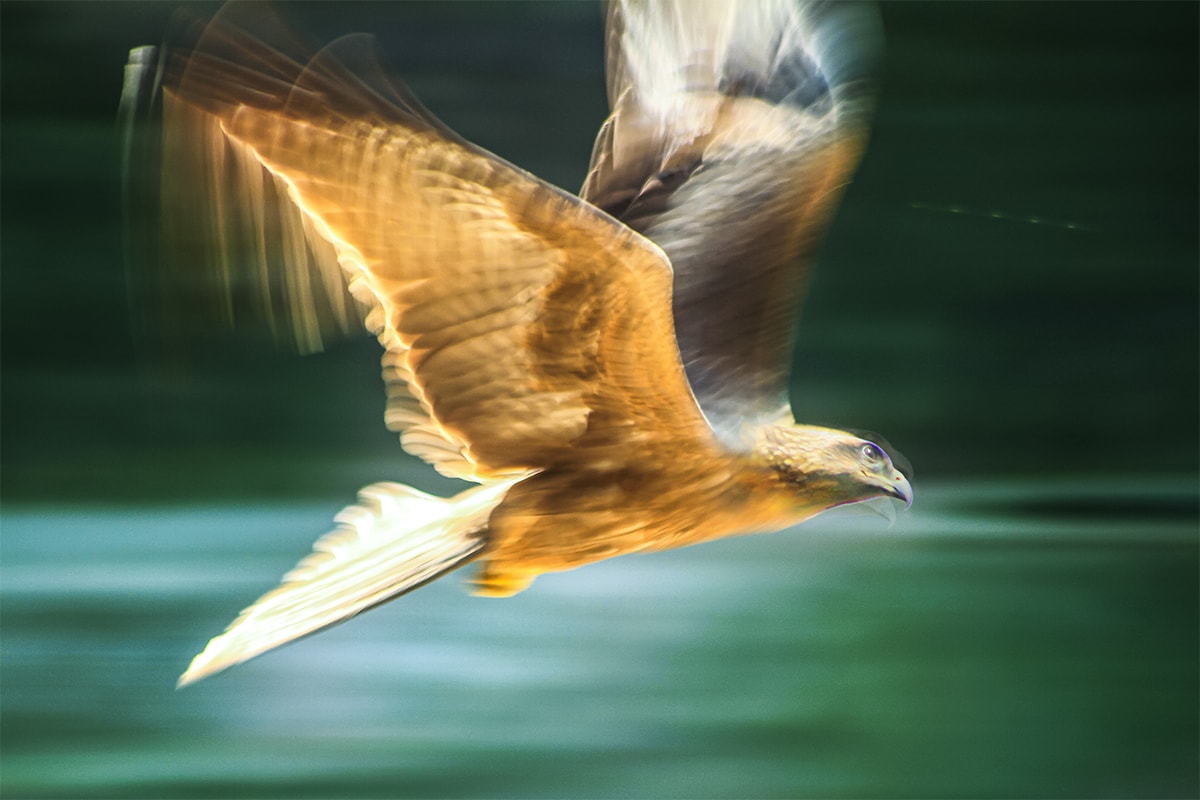 The rulebook says to use lightning fast shutter speeds to capture wildlife, but you can get awe-inspiring shots by using slow shutter speeds too. For example, if you photograph a bird at 1/25 you can give your images enough blur to give a sense of motion. The same applies to land animals. Pan your camera to follow your subject while you focus on it and let the background blur out as you hit the shutter button. It’s not easy, but it’s a lot of fun and definitely worth it when you finally make it work!

Practice with your pet 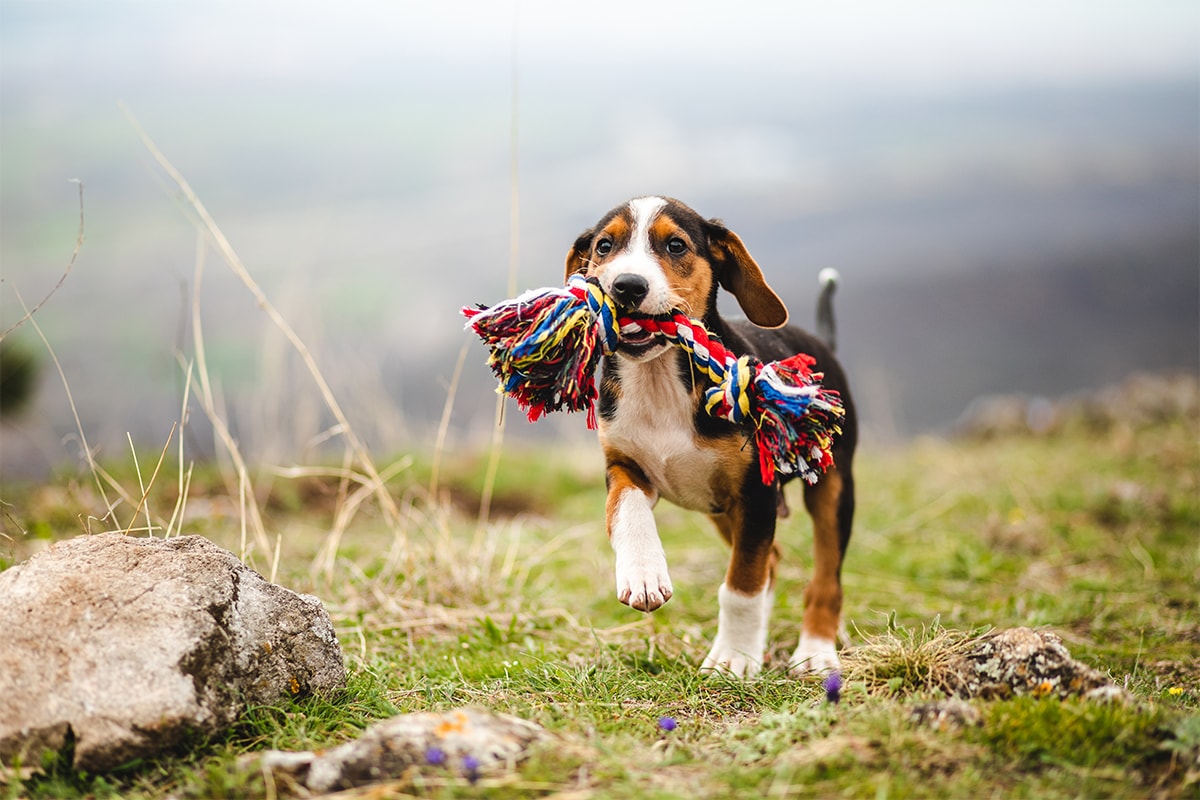 Sometimes the best wildlife shots we get are of the furry beasts that live in our own homes. Take them into the garden or the beach with their favourite toy and practice getting dynamic shots of them running around and playing. Or why not try photographing them without them realising and capture candids.

Wildlife photography is as much about being in nature as it is about taking photos. So don’t worry if you end up going home without any images. Be patient and persistent, shoot as often as possible, and you’ll soon hone the skills needed to capture really wild moments!